The sea has been quite rough since we got into the English Channel after leaving Amsterdam. But it's not as rough as it was on the cruise to Iceland earlier this year. We have taken the precaution of wearing our sea bands and also taking a seasick pill as a preventive measure. There are certainly a few less people going about on deck. Some passengers must have succumbed to "mal de mer". Hope we can avoid that.

The boat continues to roll about but hasn't stopped us winning the carpet bowls this afternoon. It was a huge laugh as we all tried to use the motion of the ship to produce the winning shot. The practice of using the bias of bowls to achieve a winning shot went out the door but not over the side of the ship. Shots that were winning at one time were suddenly losers but my last shot was pure skill. As soon as it came to rest I claimed it quickly before the next movement of the ship moved it.

Dinner dress code was formal tonight and I was the only person wearing the kilt. I don't know what to do for the rest of the cruise because since we came on board the number of formal nights has increased from 2 to 4. One of the nights is a black and white night and I did not take my white dinner jacket. Anyway that night is Hogmanay and I was going to wear my kilt in any case, so there.

The dinner menu for the Captain's welcome on board party was excellent but I won't bother you with a full run down. 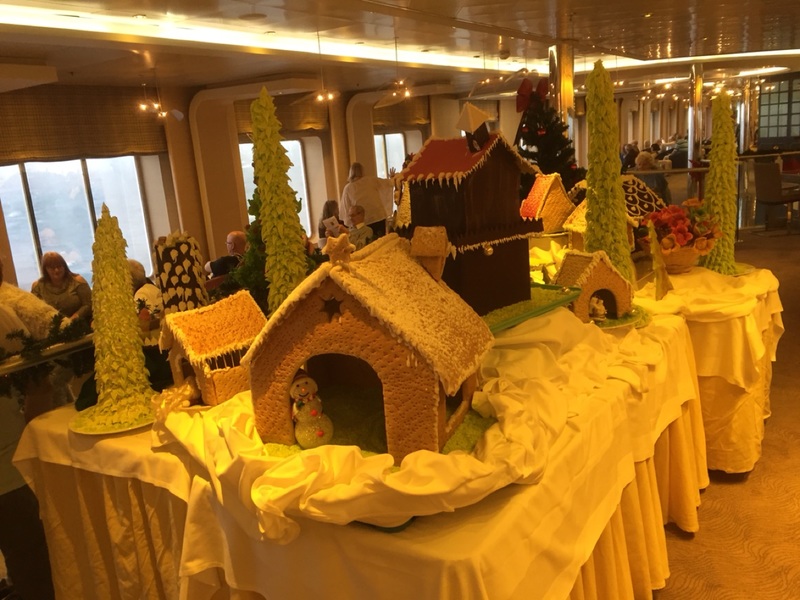 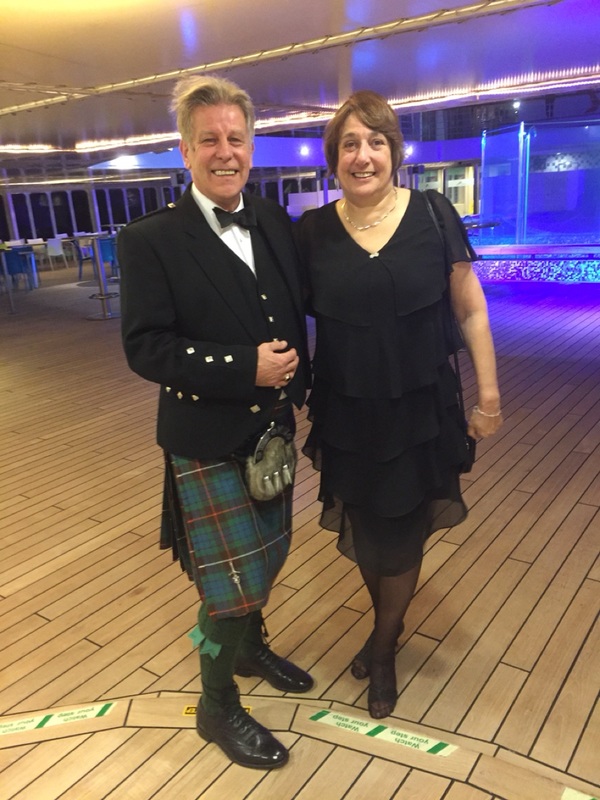 Just had a walk through the city centre today. Have done the touristy things before. In Amsterdam you always have to beware of cyclists. They creep up on you so quietly and appear to be a law unto themselves, cutting across from the cycle lane at a moments notice. But look out if you venture into their lane at which time they employ their own form of road rage.

We took a shortcut through the red light district and passed the wacky baccy stores to the shopping area. Surprisingly we happened upon the gold and diamond store but it had not opened yet. In any case none of the items had price tags on them so used the old adage "if you have to ask the price we can't afford it". 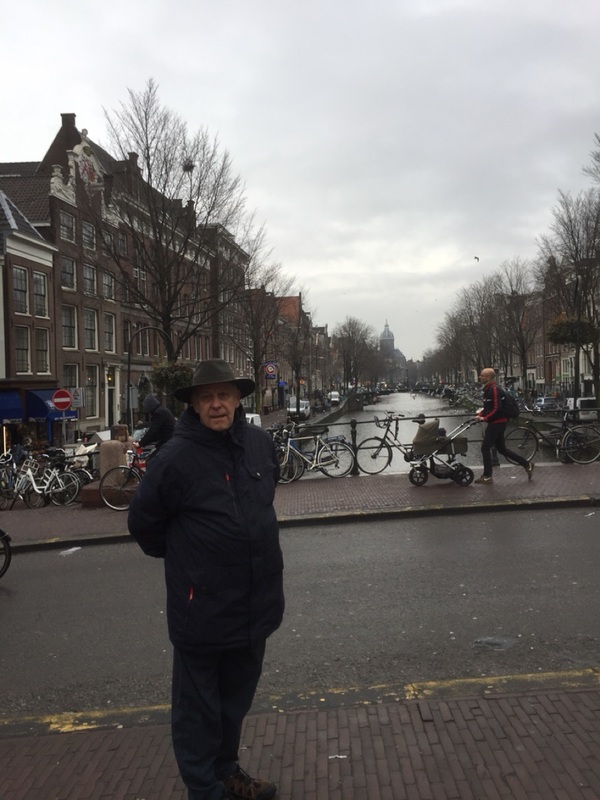 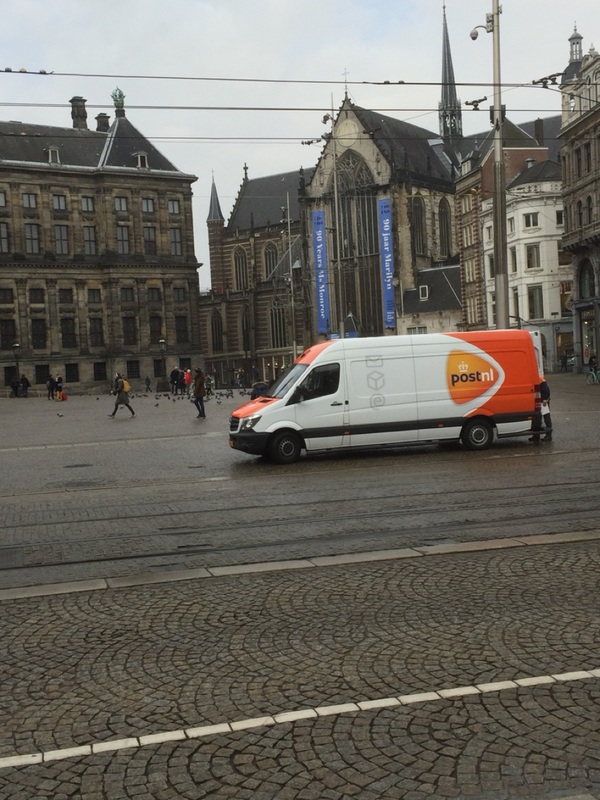 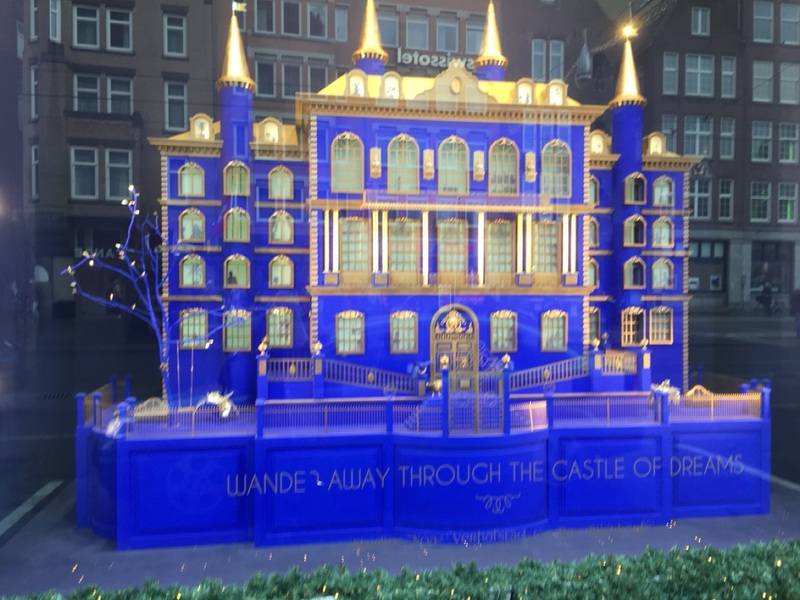 Perth to London to Amsterdam

Danuta says I've to do the blog for a change so these are George's thoughts.

Arrived at Perth Station at 23:30 on the 20th, the train arrived minutes later. Cabin very cramped so luggage was put into next door empty cabin by attendant. Rebuked by attendant for not asking for it to be put in proper place of guard's van. Holiday nearly off to a bad start when Danuta rolled over in her bunk and promptly fell off onto to the floor. Luckily only her posterior, elbow and pride suffered a little.

I got off to sleep fairly quickly as usual when travelling but Danuta was restless after her encounter with the floor. Didn't wake up until the attendant arrived with the tea and coffee.

Got off the train at Euston at 7:45. The station was already busy with loads of commuters. We couldn't face that every day thank goodness we are retired and don't live in London. We found a place to have breakfast and hung around there until about 10:30.

The taxi journey to Victoria Bus Station took about 45 minutes, loads of traffic, saw some sights on the way including passing the Royal Philatelic Society building (41 Devonshire Place). How appropriate for us. How people manage to get through the traffic everyday is unbelievable.

We boarded the bus for Tilbury at 12 noon. The journey took about 2 hours. We saw a few sights of London on the way (see pics).

Check in procedures very smooth and into cabin in less than 1/2 hour. Luggage already waiting for us. Cabin quite spacious at least until Danuta unpacks and leaves stuff all over the place.

When we went down to the dining room the head waiter recognised us (don't know if that was good or bad). We were shown to our table to find that someone was occupying our seats. They did not have their reservation card with them and obviously did not want to move because they must have known the other four beforehand. So we have a cosy table for two, nice, but it is a way of meeting people if you share a table with others. We have met lovely travel companions in this way over the years. (We hope that some of them are following this blog). 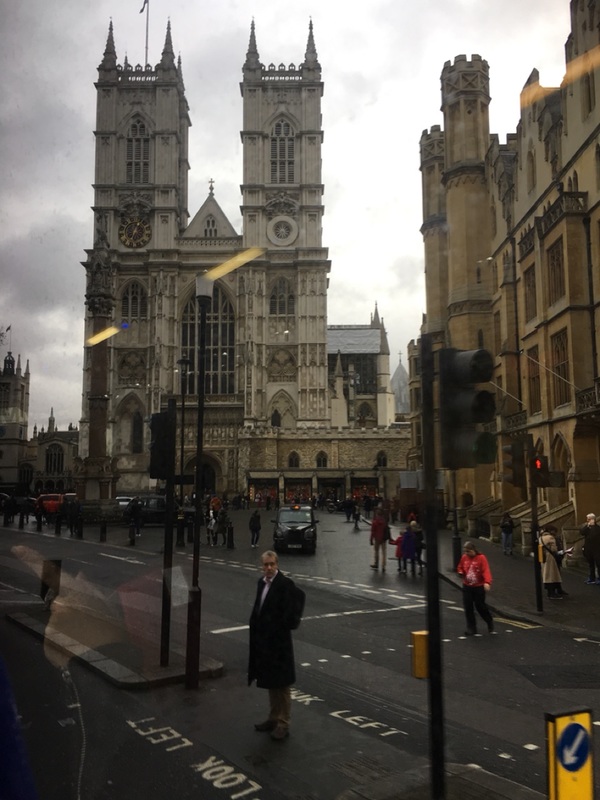 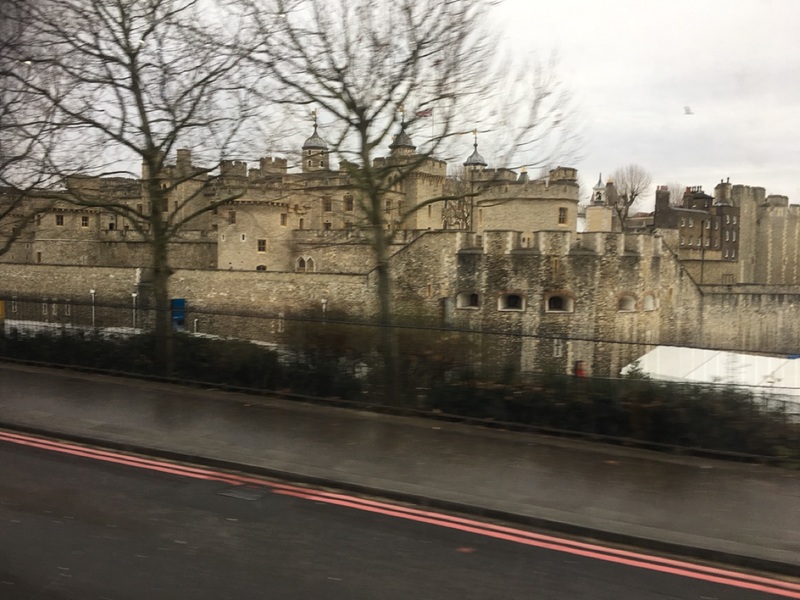 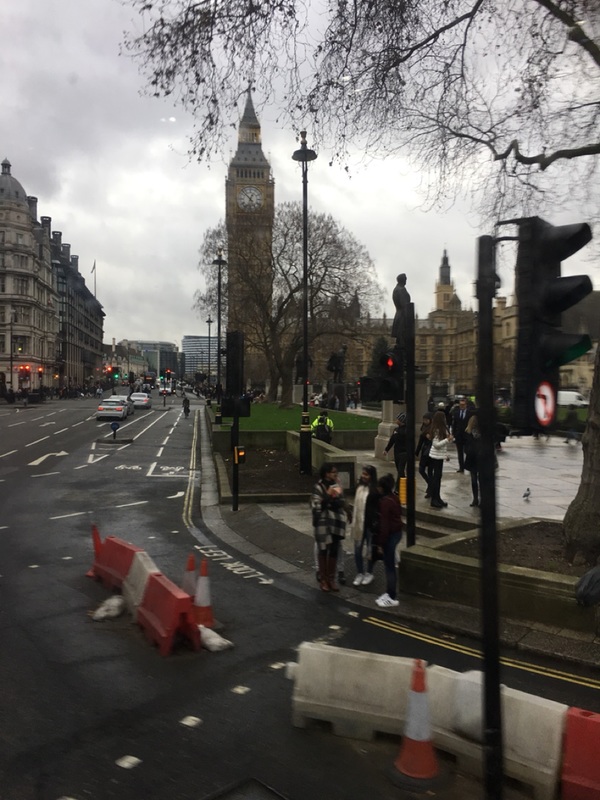 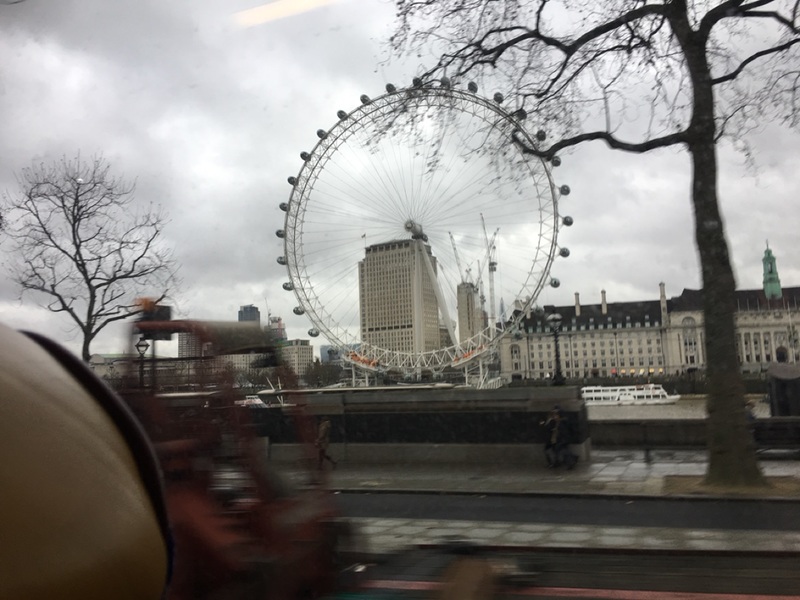 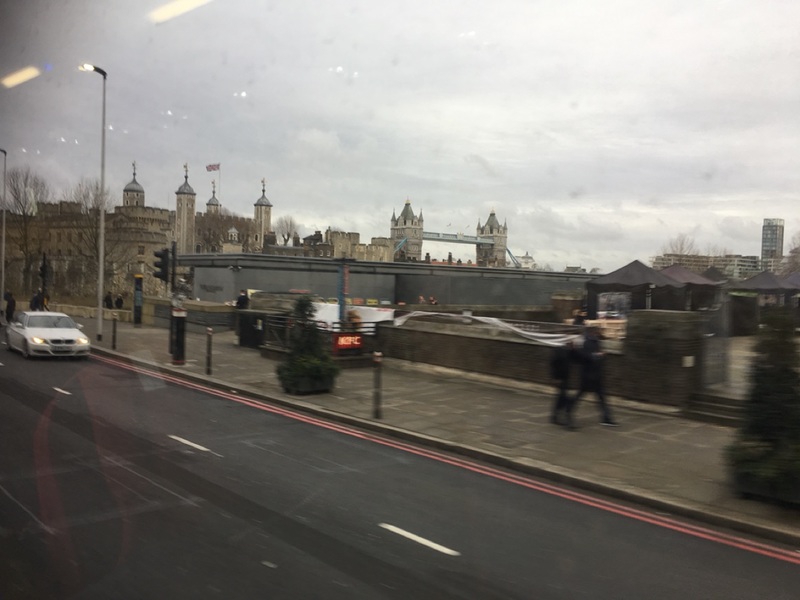 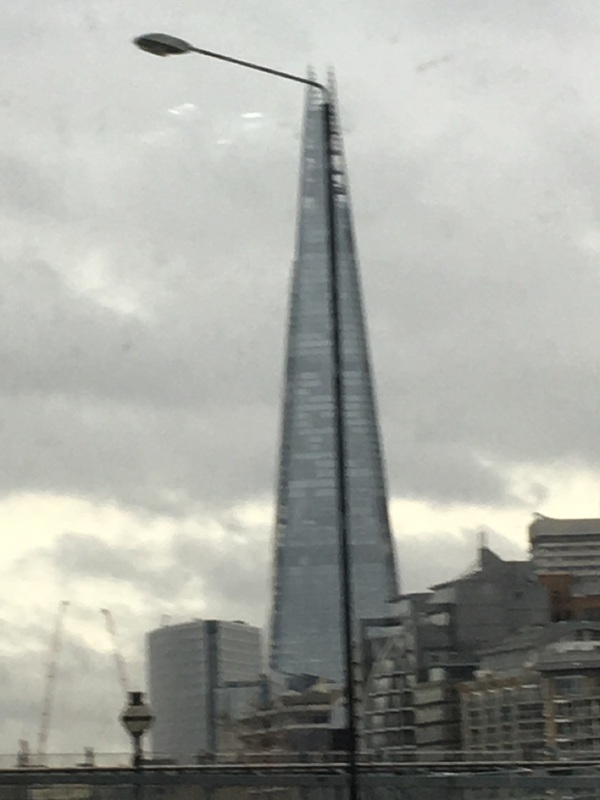 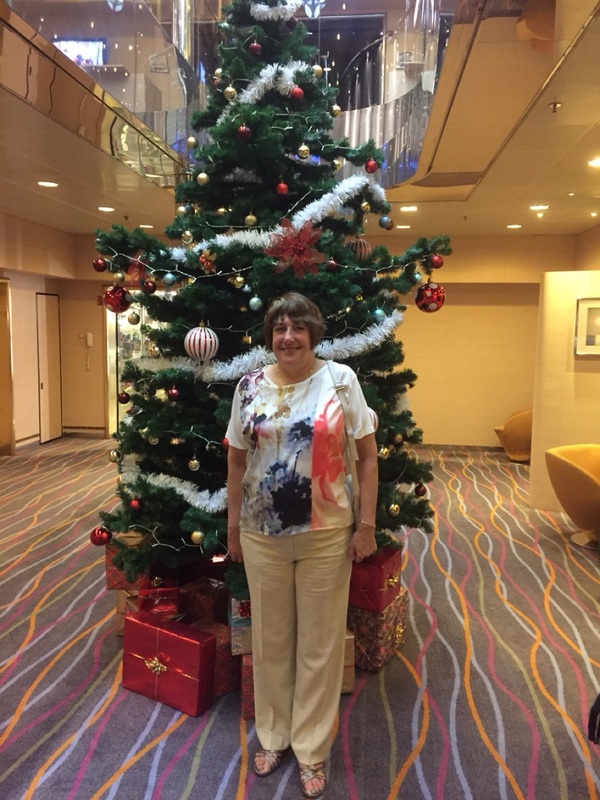 At one of the Xmas trees 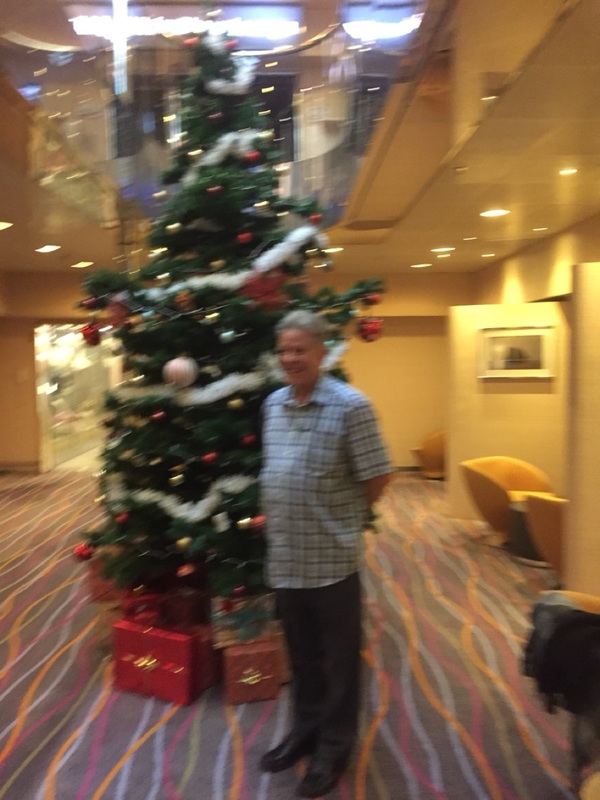 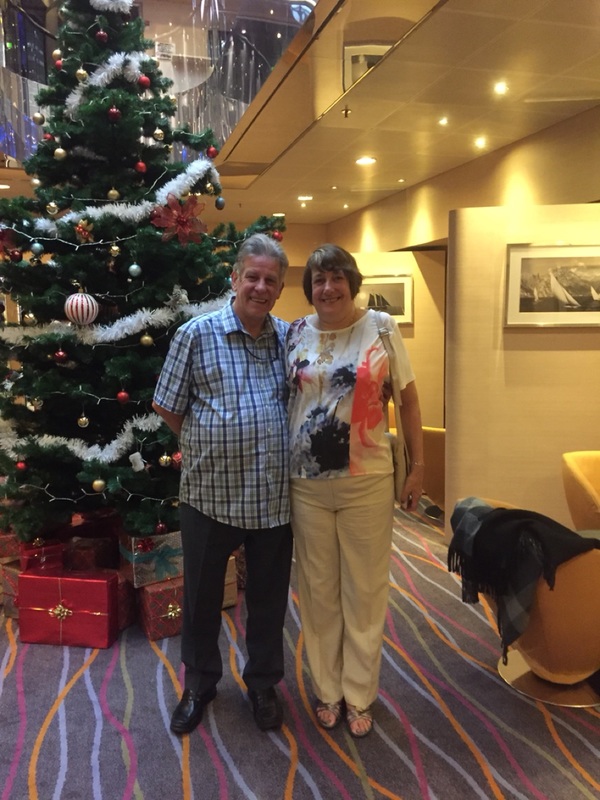